This page explains how escalation messages can be created and sent out after a period of inactivity. This guide is for interventions that coach the participant in multiple sessions. But in general, the core principles remain the same and the mechanism can be extended for any MobileCoach based intervention.

Context: The patient started the intervention but did not finish it after one hour. After this period, the escalation mechanism kicks in, and the patient gets a reminder on the phone. This reminder does not appear in the chat.

NOTE: To set the $platform variable to notSet you need to click on the Edit button. This should look like this:

For Android device the authorisation to send push notifications is triggered automatically and does not require any extra effort of the Intervention team. However, on iOS this conversational turn needs to be added on day 1 (Session 1) of the intervention. 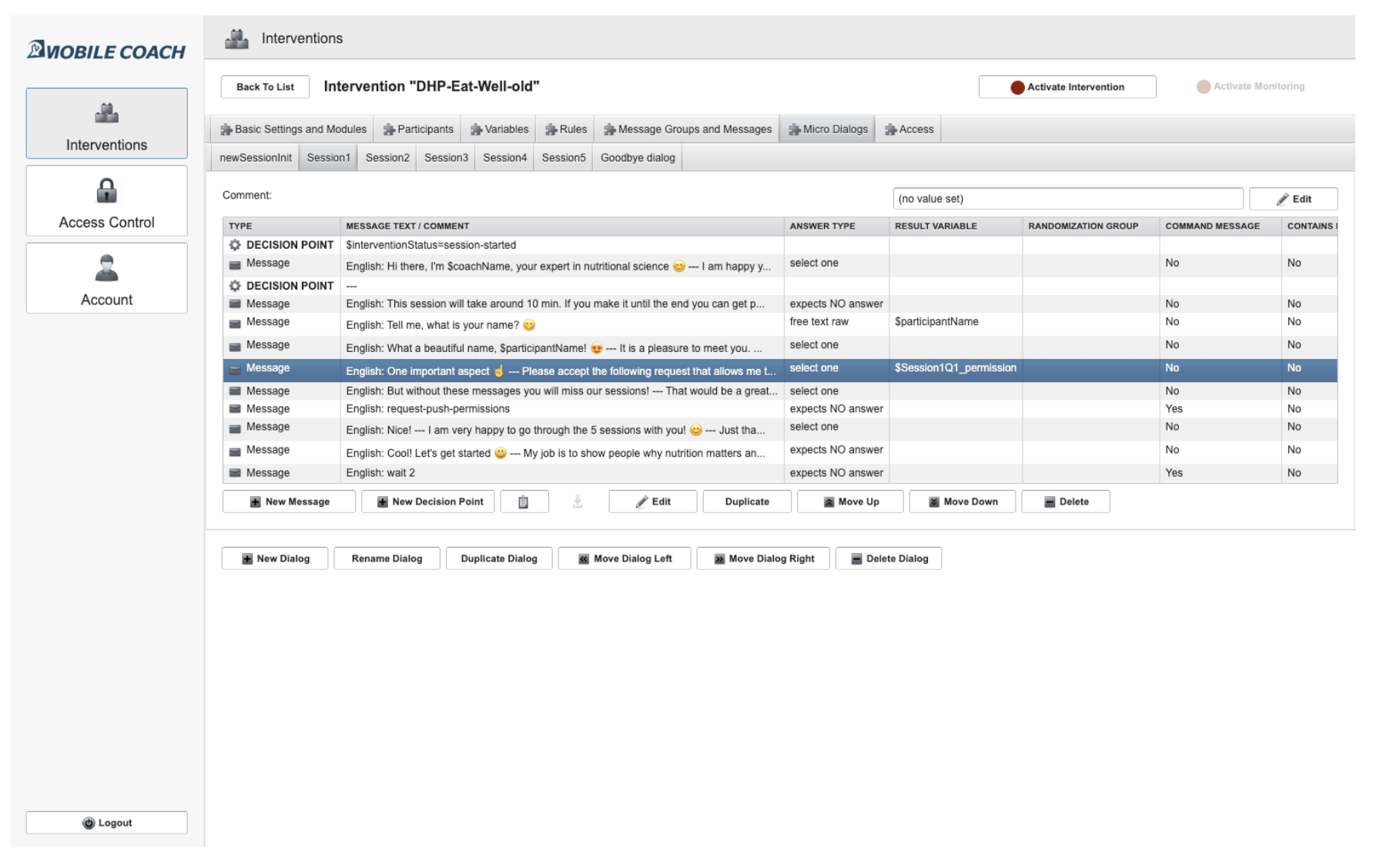 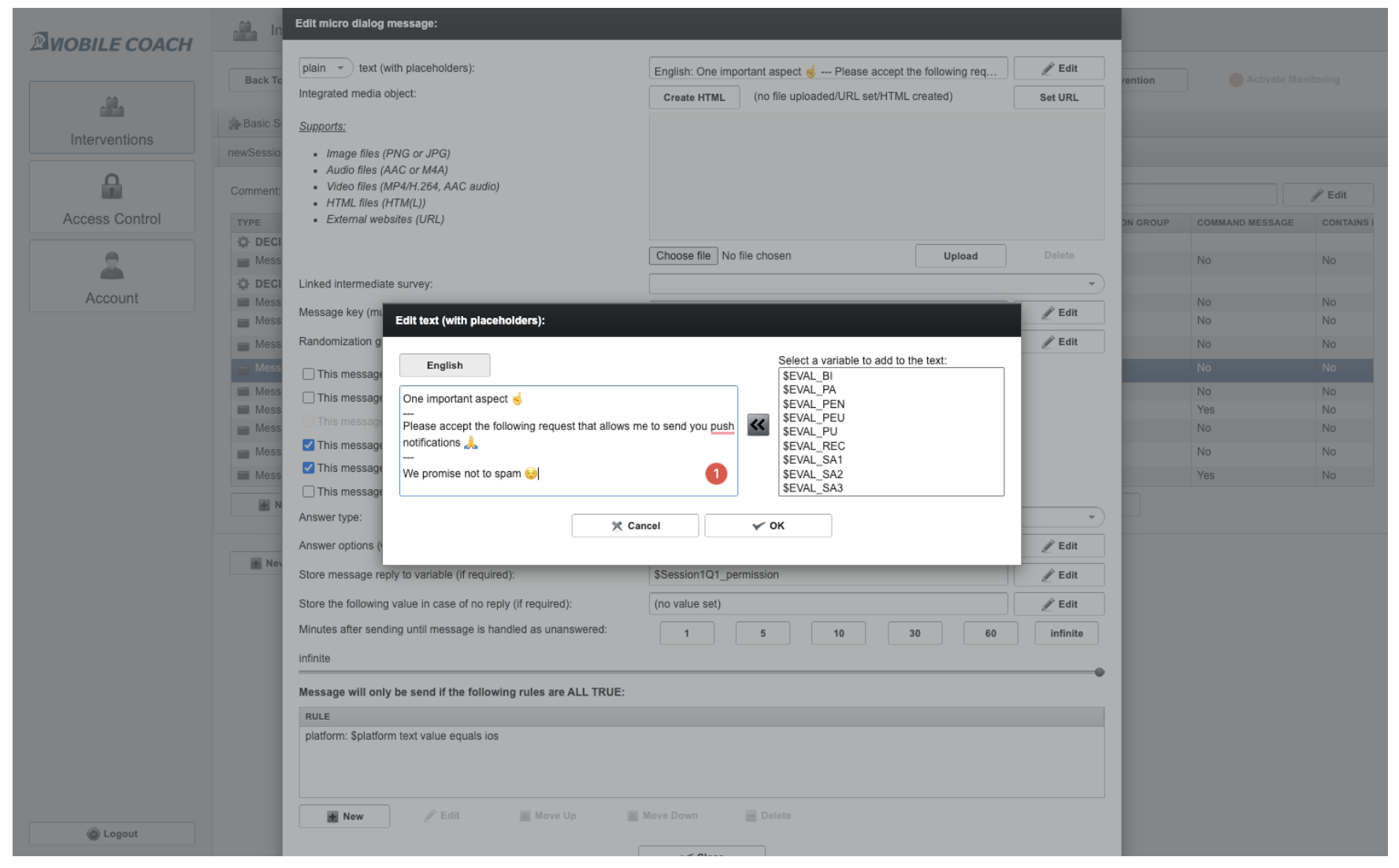 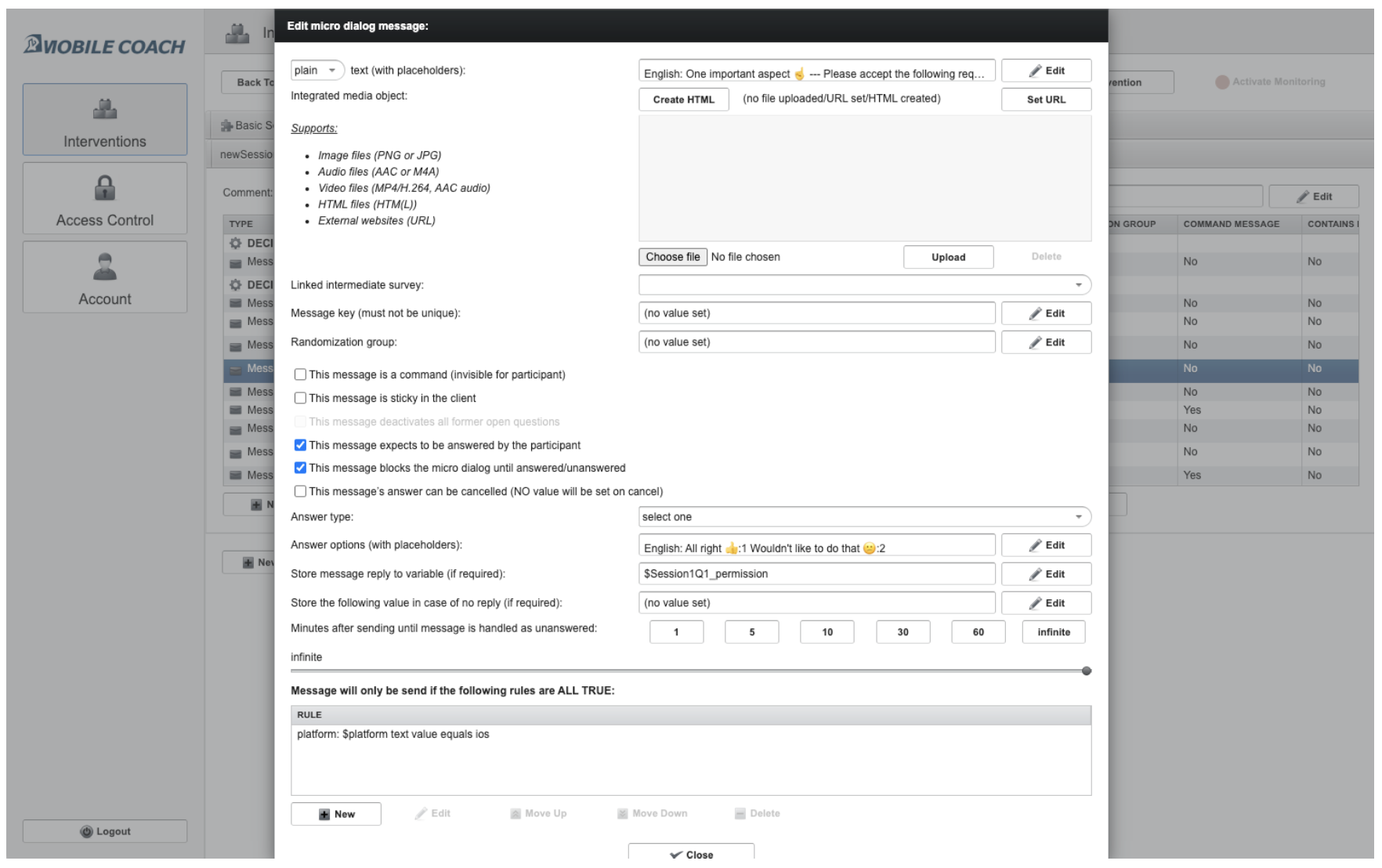 The select one text being:

The answer to this question is saved into the variable $Session1Q1_permission.

One important thing is not to forget about setting the rule on the bottom of this page to: 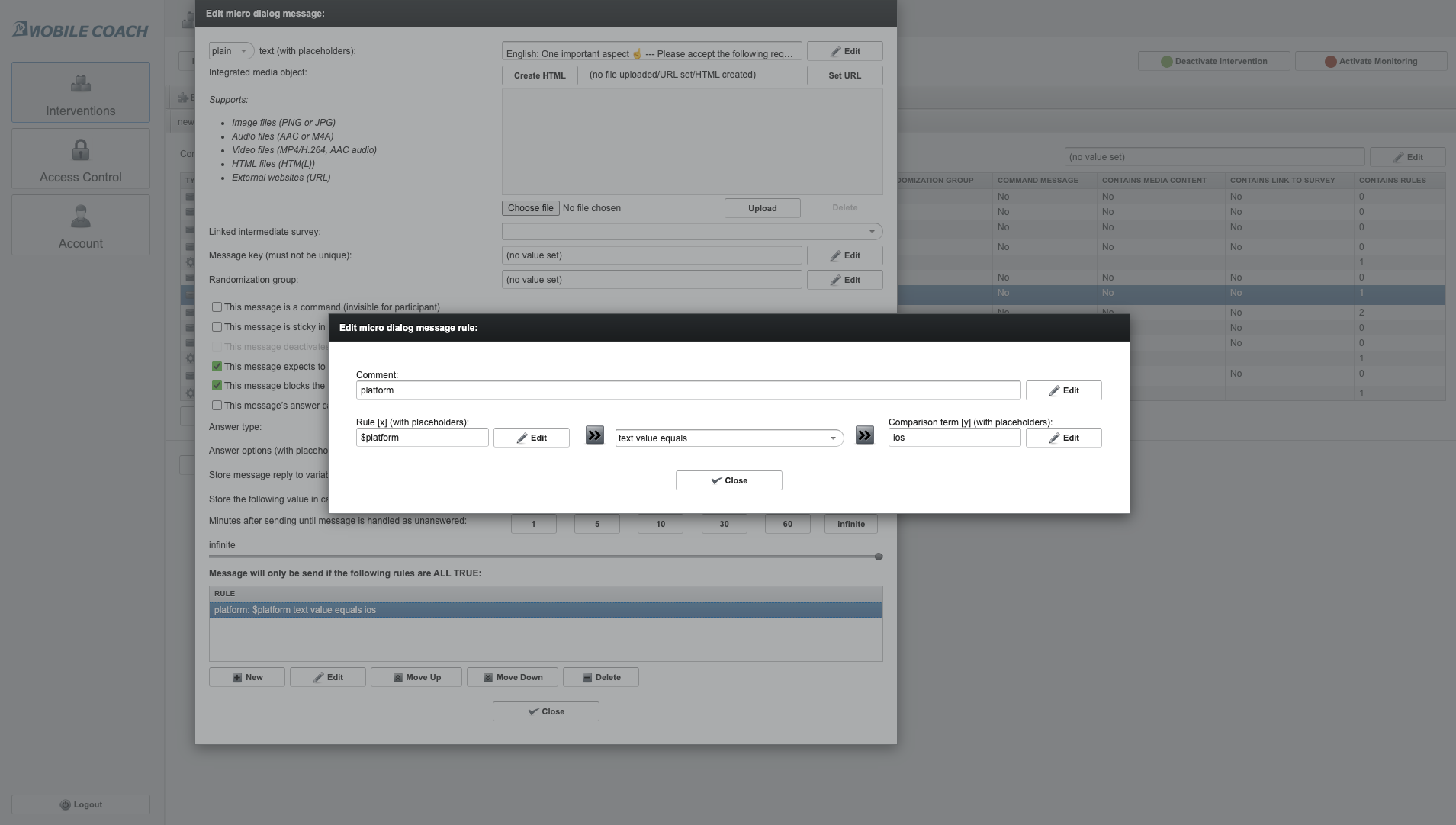 If you want, you can also add an additional conversational turn to convince people to enable the push notification if they refused it in the first place. This could contain the following text:

But without these messages you will miss our sessions!
---
That would be a great pity 😣

The answer would of type select one and could be something like:

Then the rules would be the following: 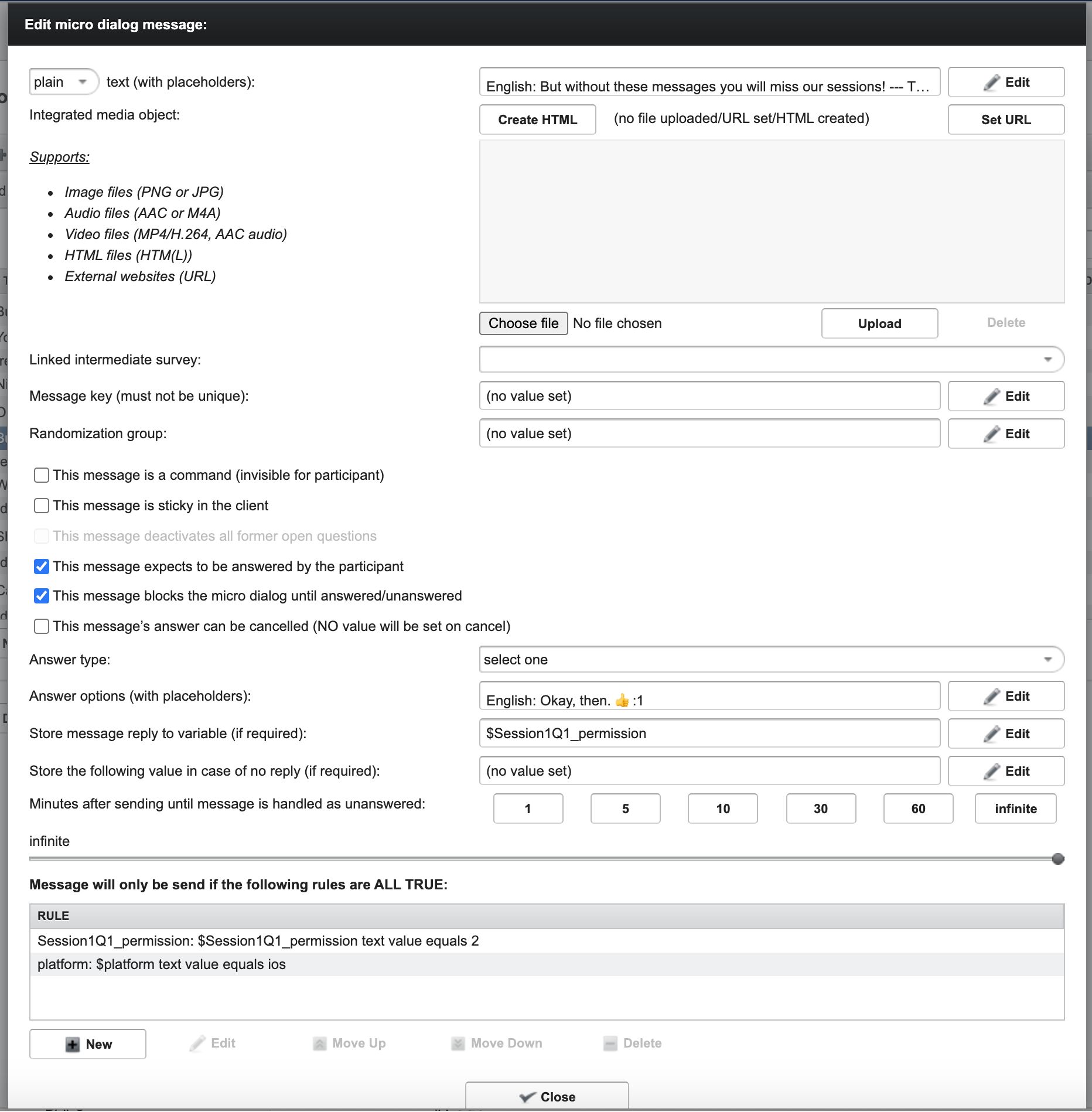 Finally, you can add the conversational turn that will ask for permission on iOS systems. The text part should contain:

Please, make sure to tick the box called This message is a command (invisible for participant) 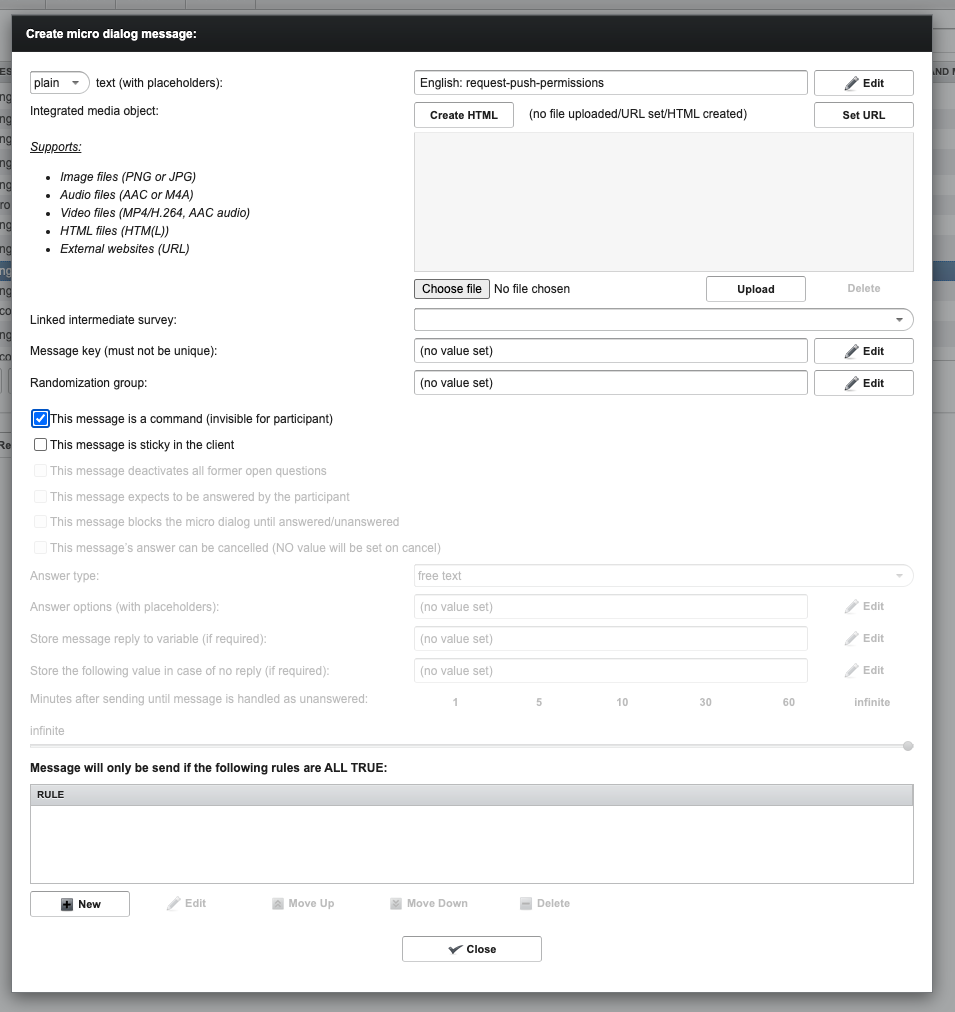 The following rules need to be created within one decision point: 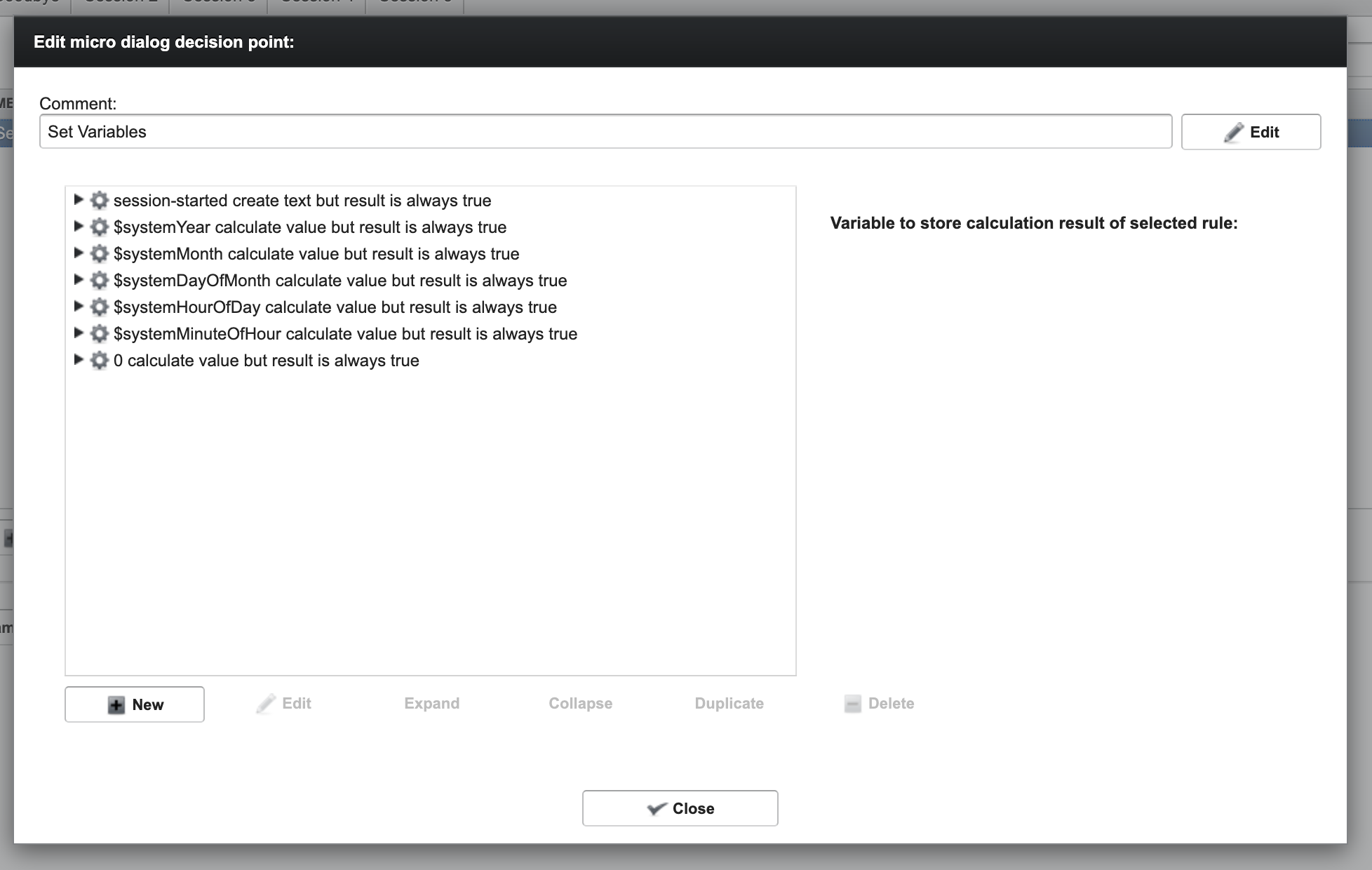 This makes it possible to send the first message to the user when he/she opens the app since on the first day the patient could not already set the time when the conversational agent should come back to the patient. 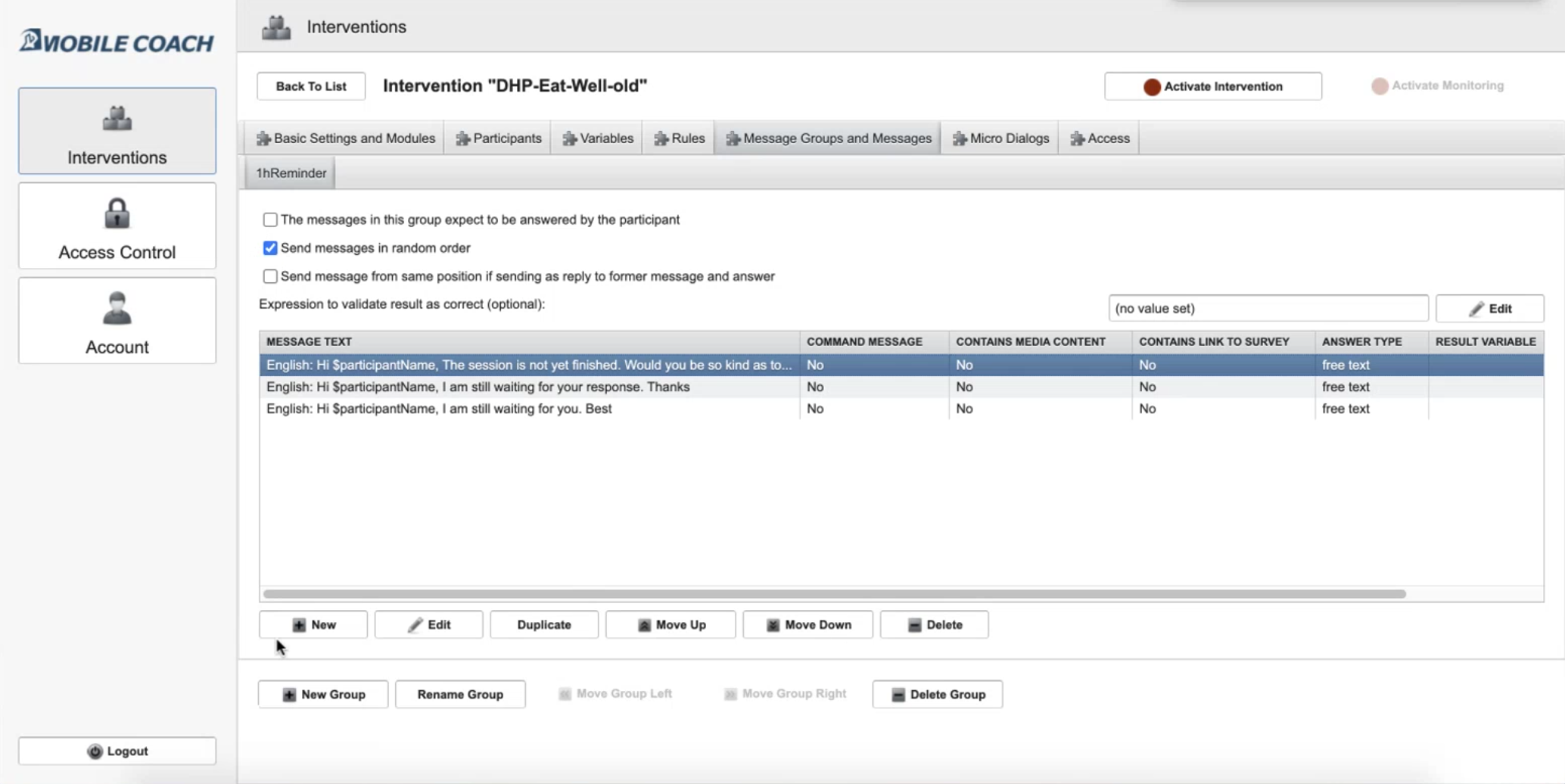 The texts could be:

NOTE: Please do not forget to tick the checkbox This message will only be sent as push notification and NOT appear in the chat. 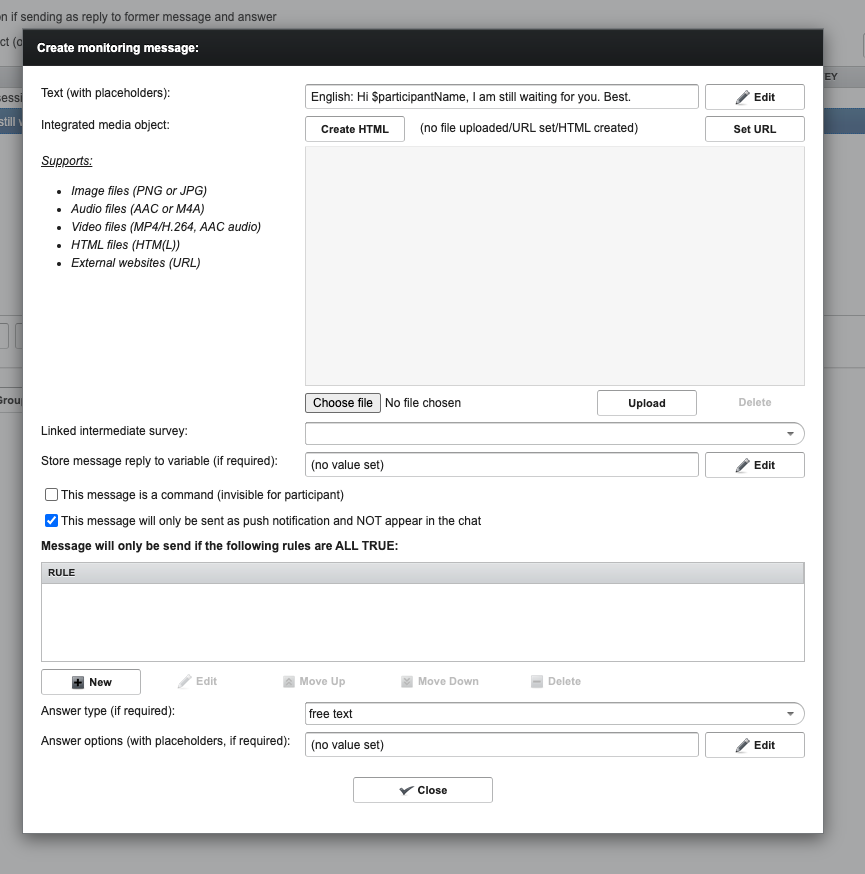 Step 1: Add the Platform Rule in the USER INTENSION Rule#

When the MobileCoach app is launched on the phone we get a user intention. In this user intention we need to specify if the phone is an android or iOS device. This should look like the following: 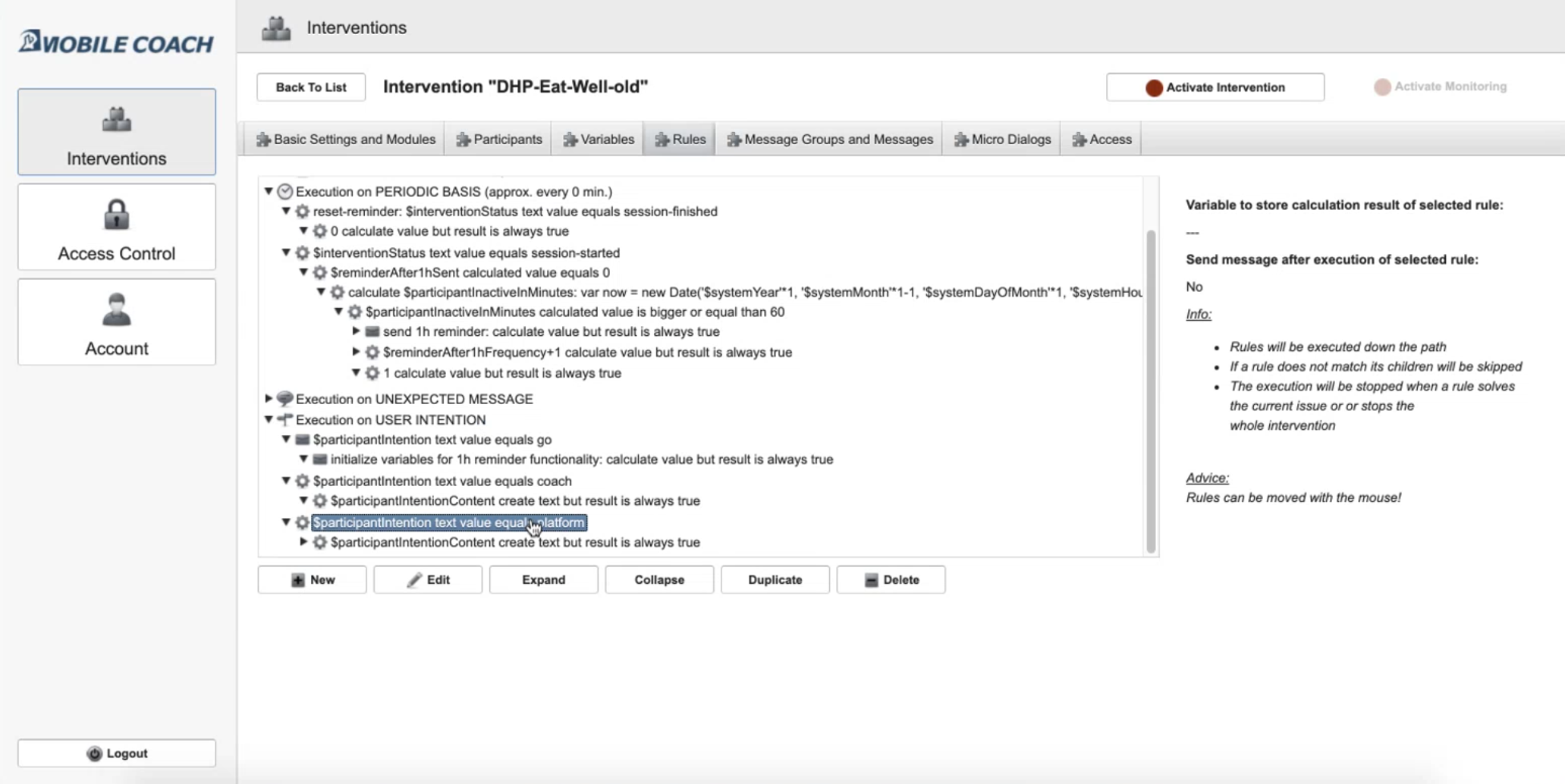 Create a new rule in the USER INTENSION section: $participantIntention text value equals platform like in the screenshot below: 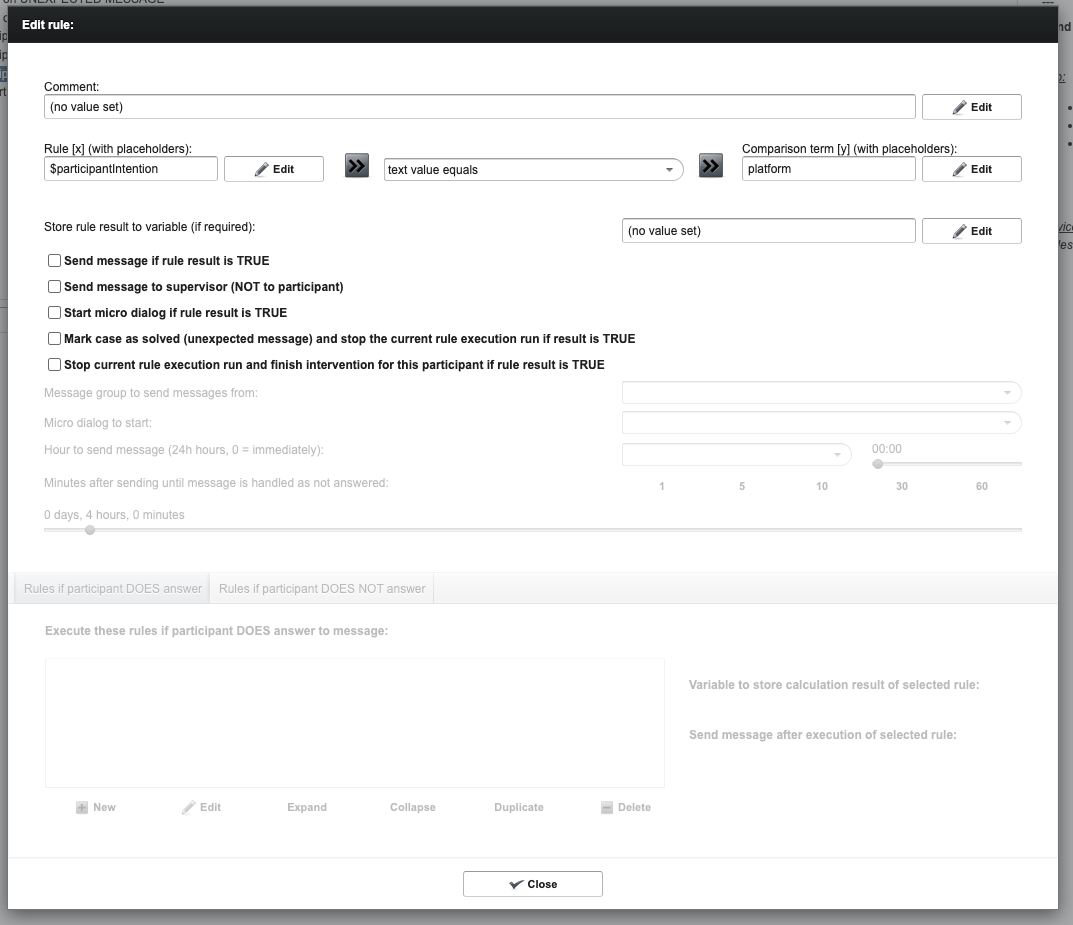 Once you have create this first new rule, please add the following within the rule. The platform intention need to be set to the following: 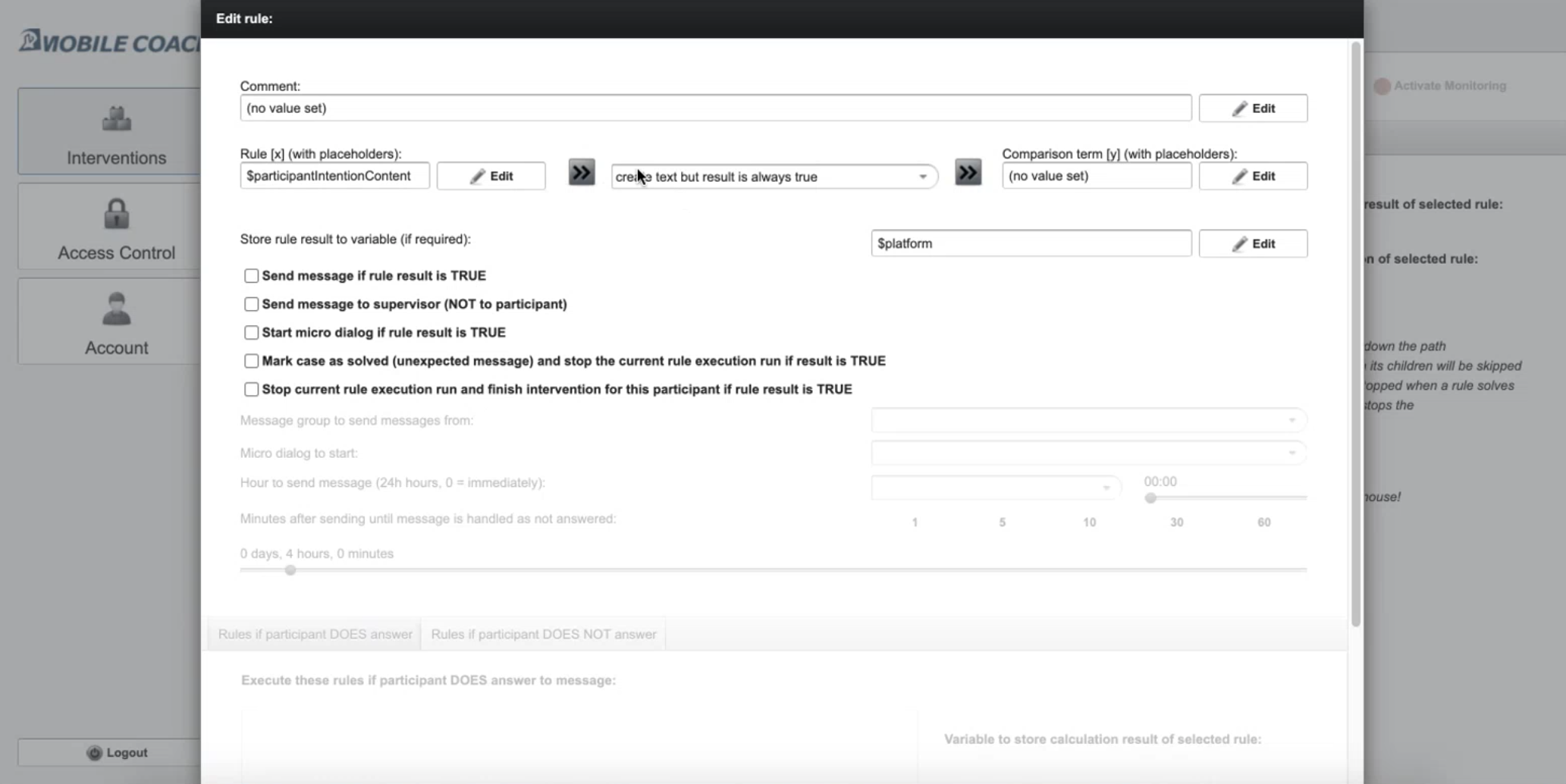 In order to trigger the 1 hour reminder rule what we need to do is to add a rule in the Daily Basis Rules just before the day of the intervention is chosen. Note: The $sendMessagetomorrow rule might not be there in your intervention as this was a custom thing made by this specific group. 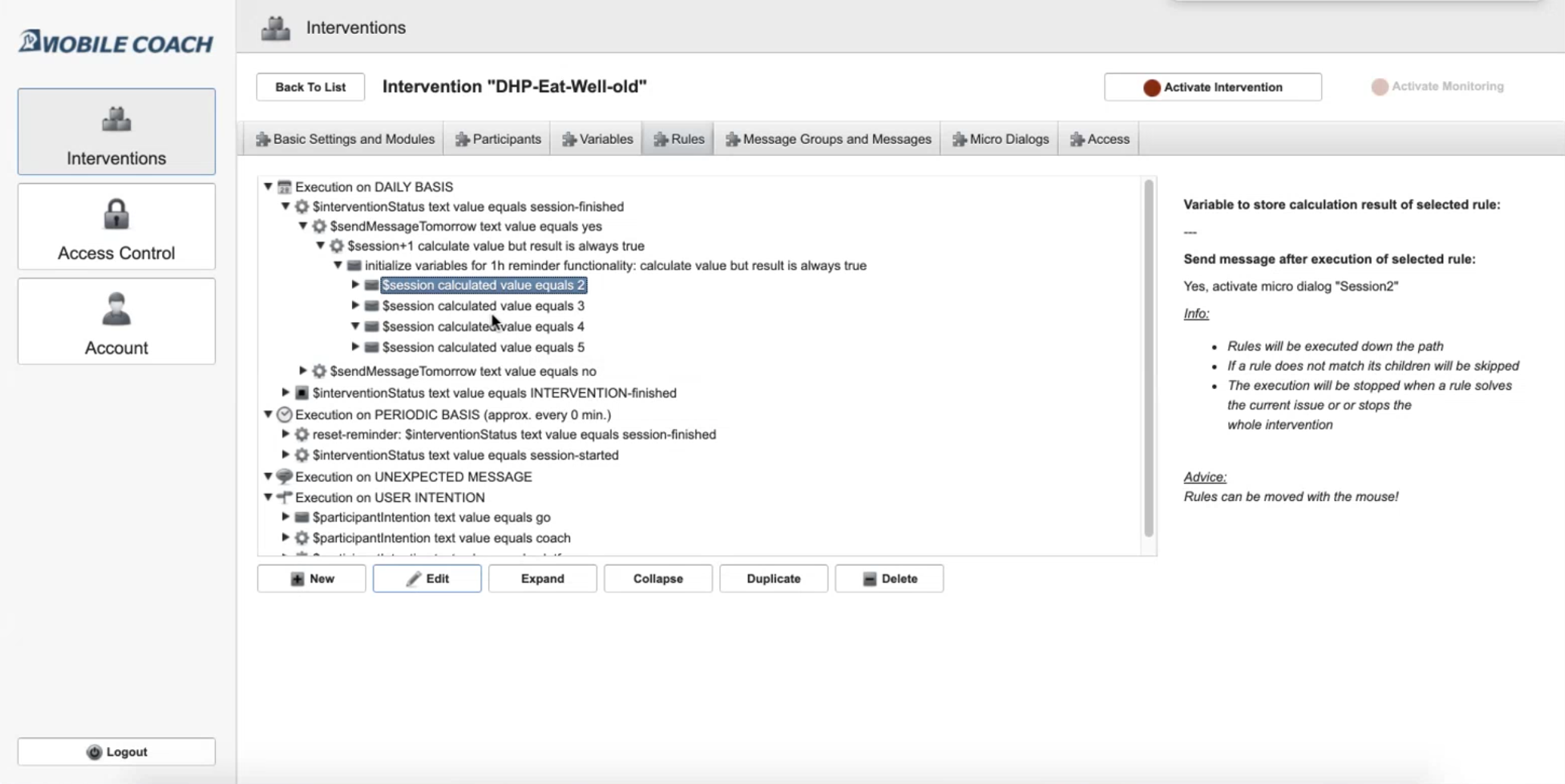 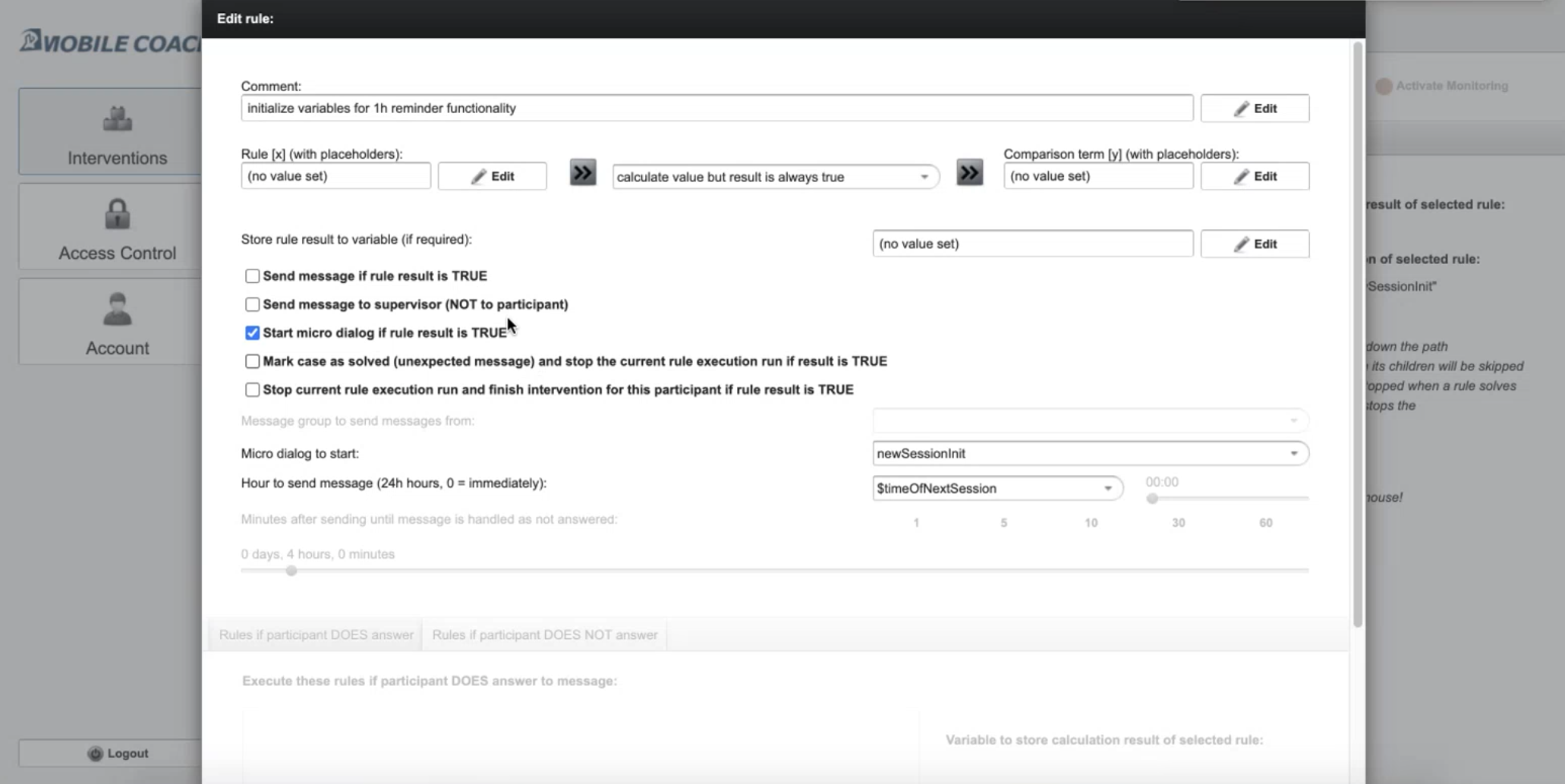 This will make sure the variable are initialized properly before starting a new session. The Daily basis rule is run every day at 12:00 AM

The USER INTENTION rules should be set accordingly: 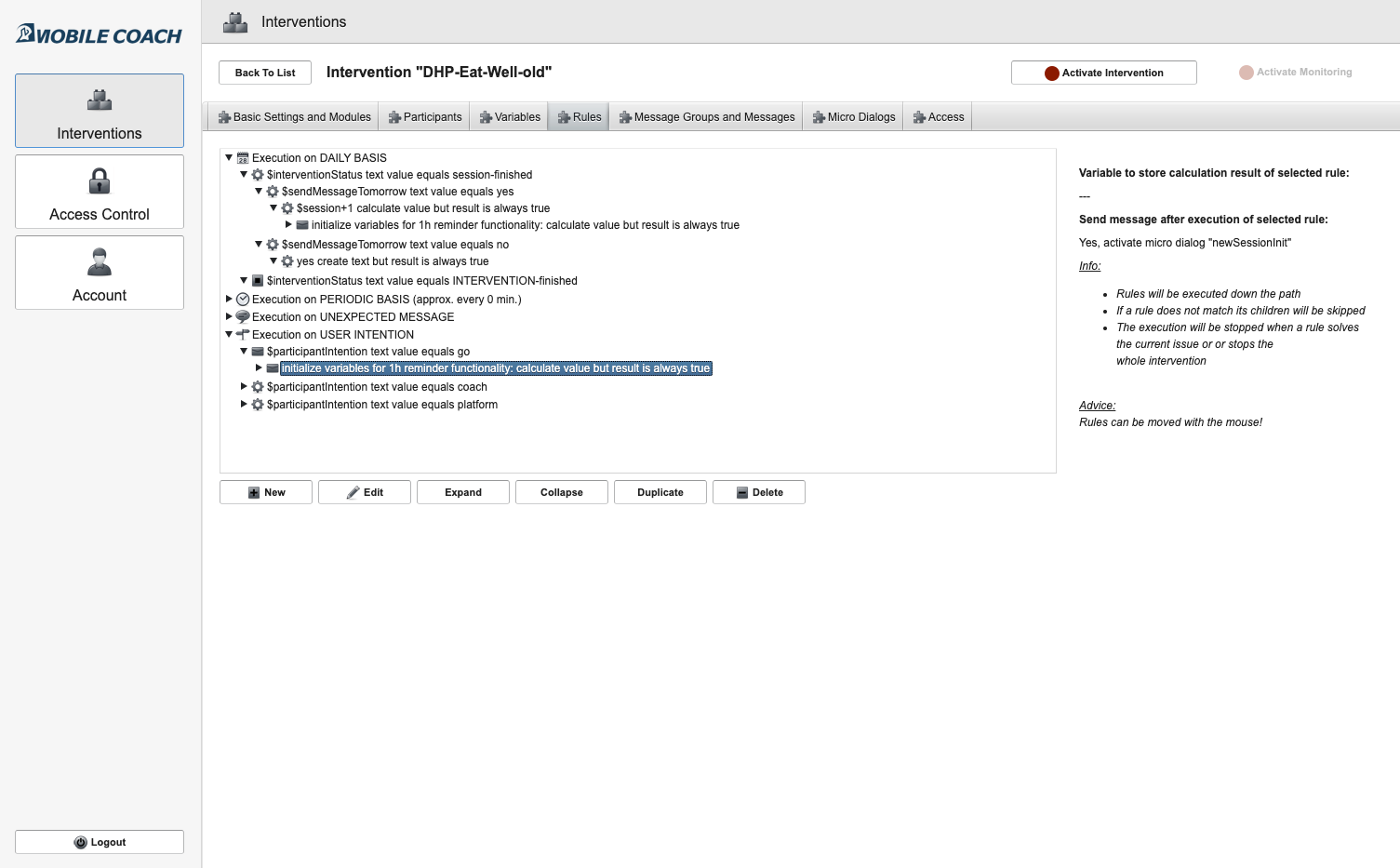 This new rules looks as followed and be named initialize variables for 1h reminder functionality rule: 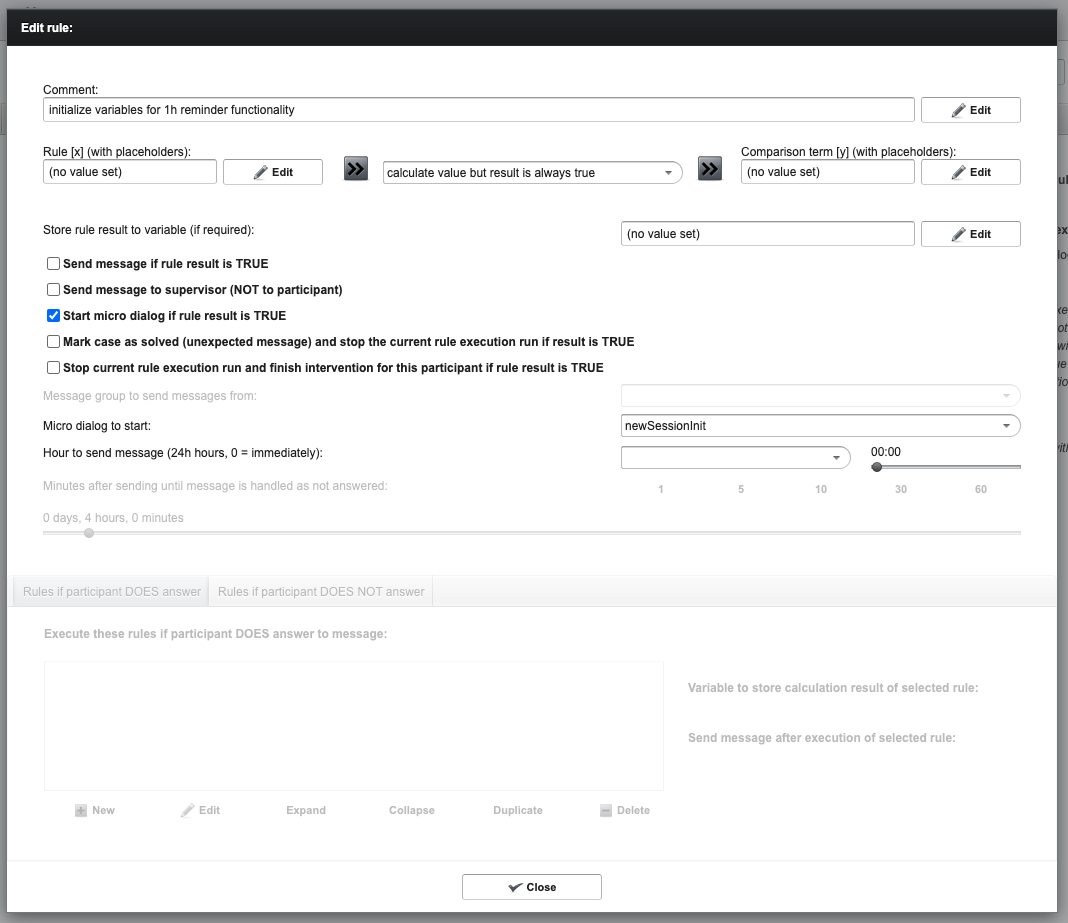 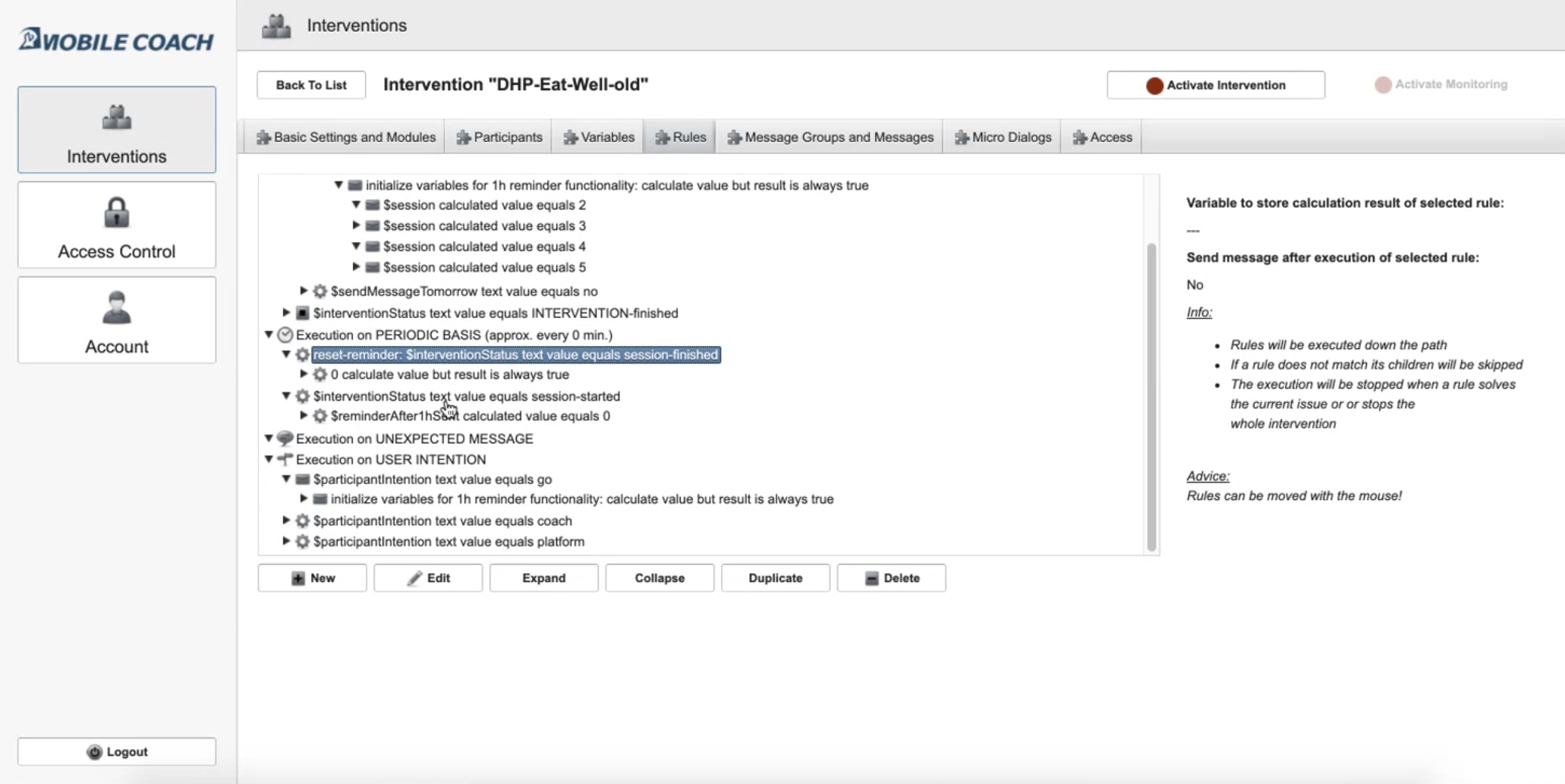 Here instead of of an execution every 0 minutes something should be run periodically every 5 minutes. This is the goal of this section.

The important variable to set here is the variable $reminderAfter1hSent. The rules should look as followed: 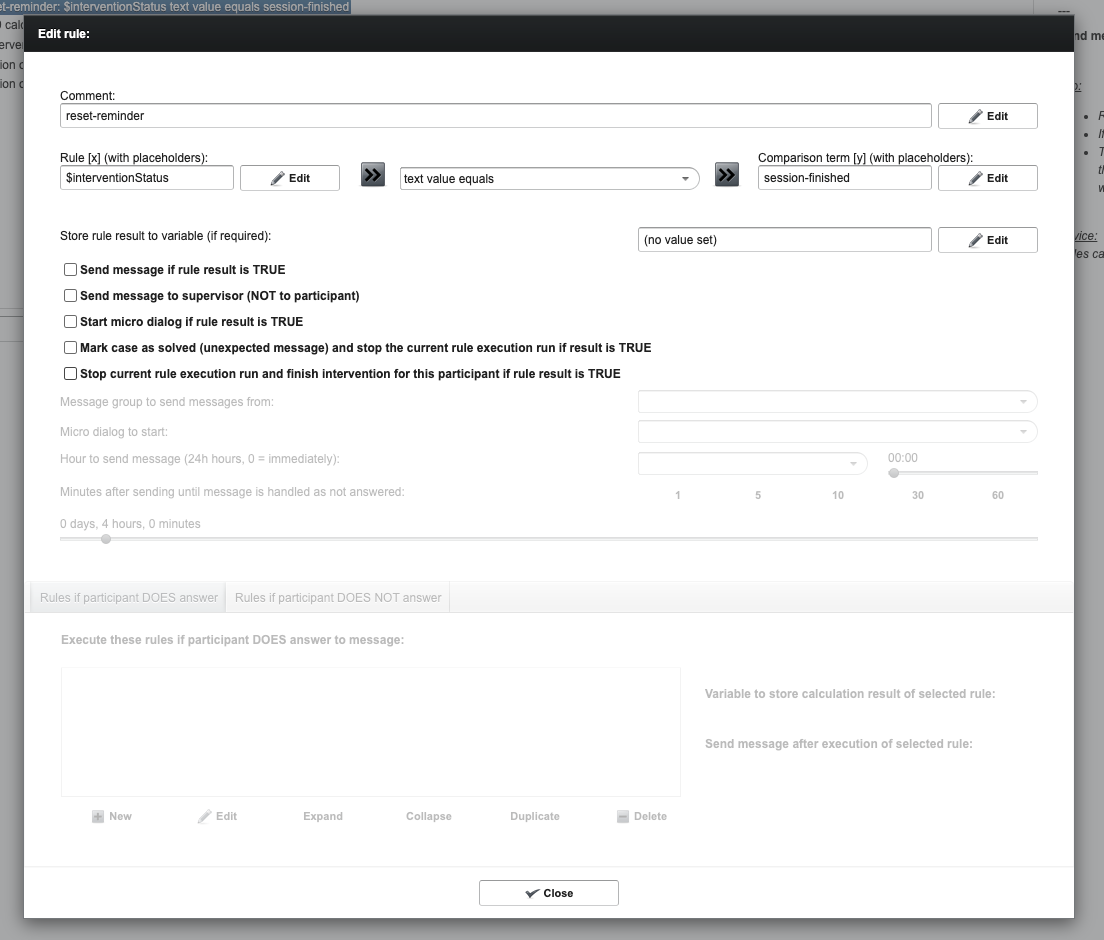 Now you can move on to the second set of rules: 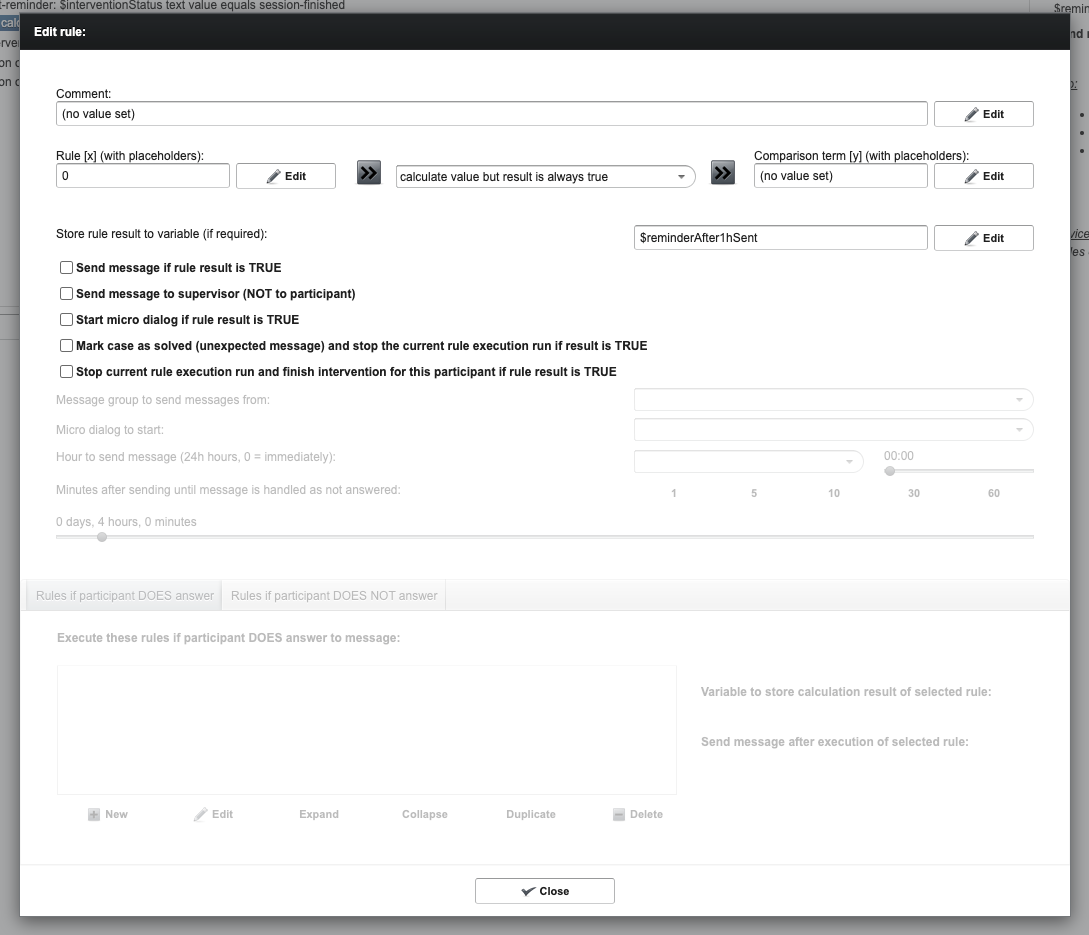 The idea here is that there should be a maximum one reminder for one session. Before the beginning of a session, the value is set to zero and then, if the reminder is triggered the variable is set to 1. 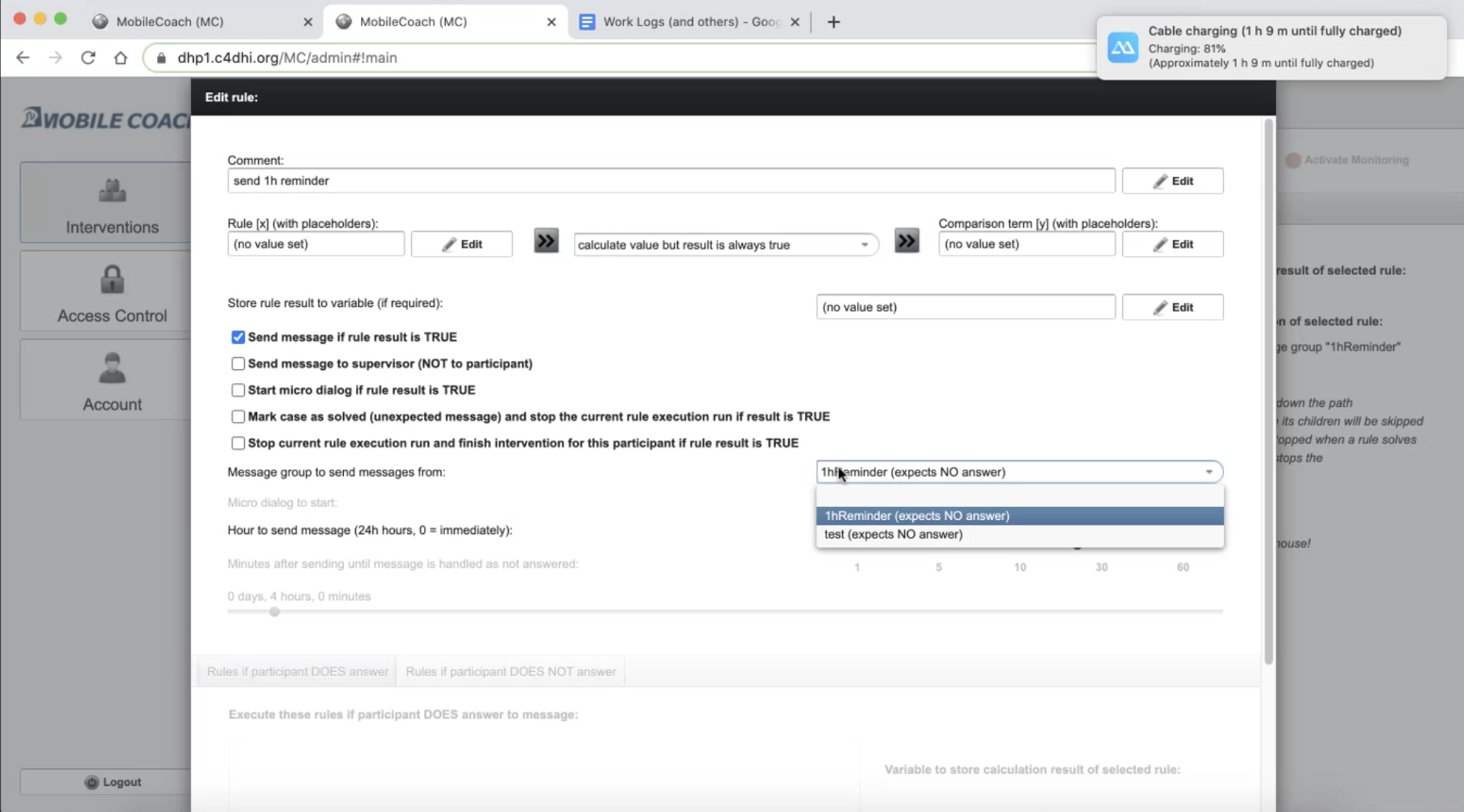 To compute the amount of time that has passed between the last interaction of the patient with the app we need to set the following rule with the name calculate $participantInactiveInMinutes: 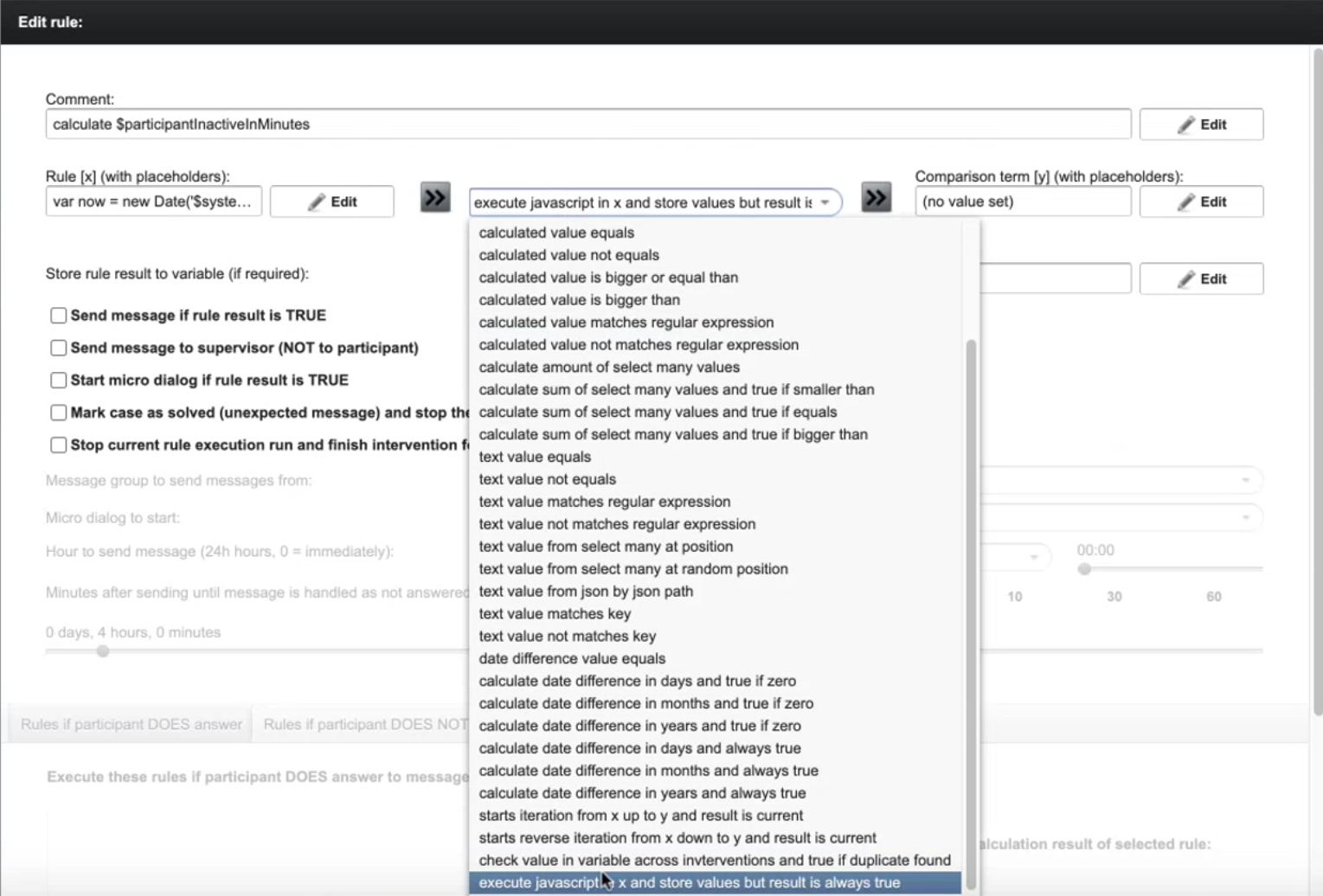 The javascript code to insert is the following one:

If this script cannot be copy-pasted please make sure the following variable exist:

After this the following rules need to be implemented:

Then create the condition that send a reminder after one hour: 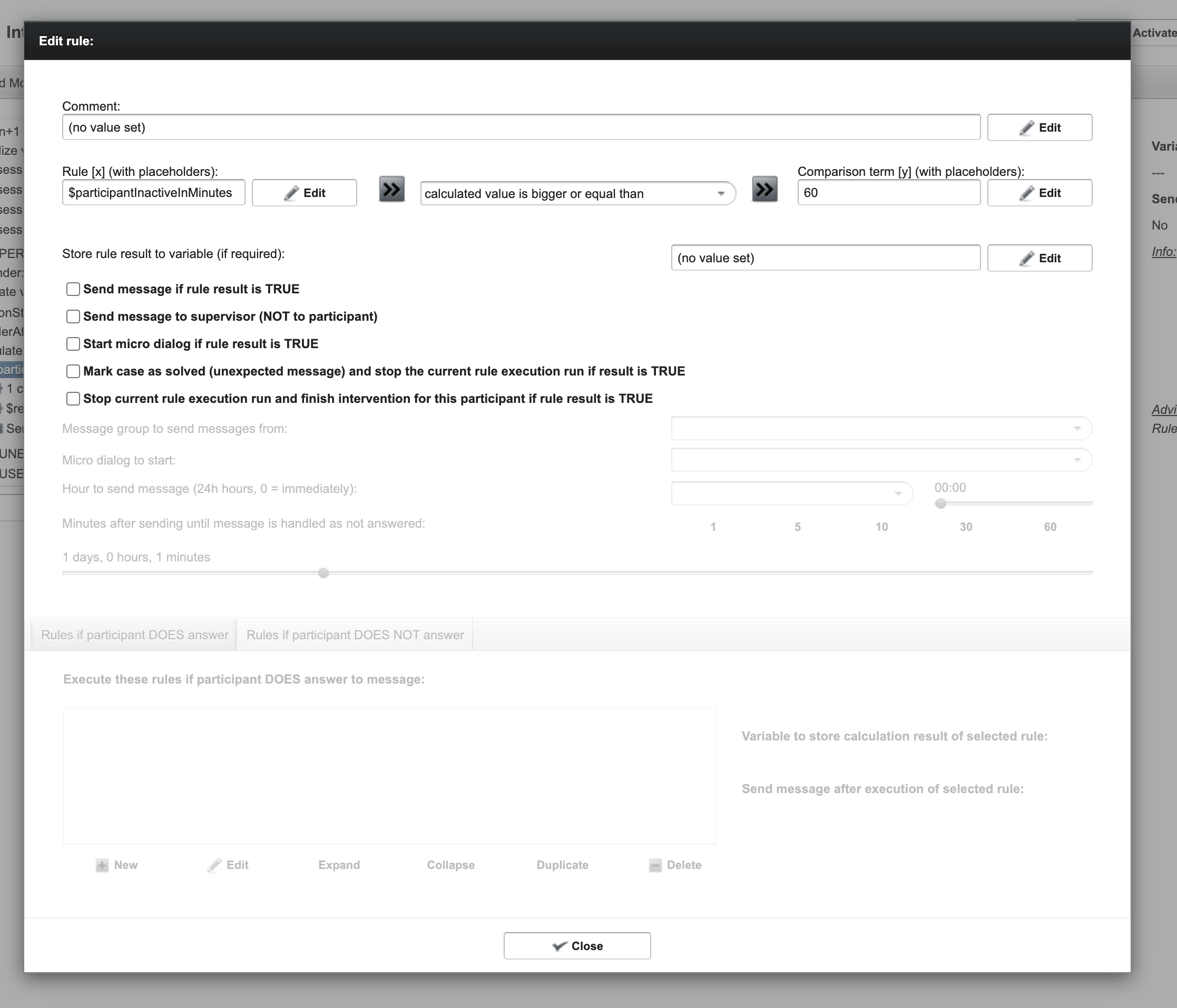 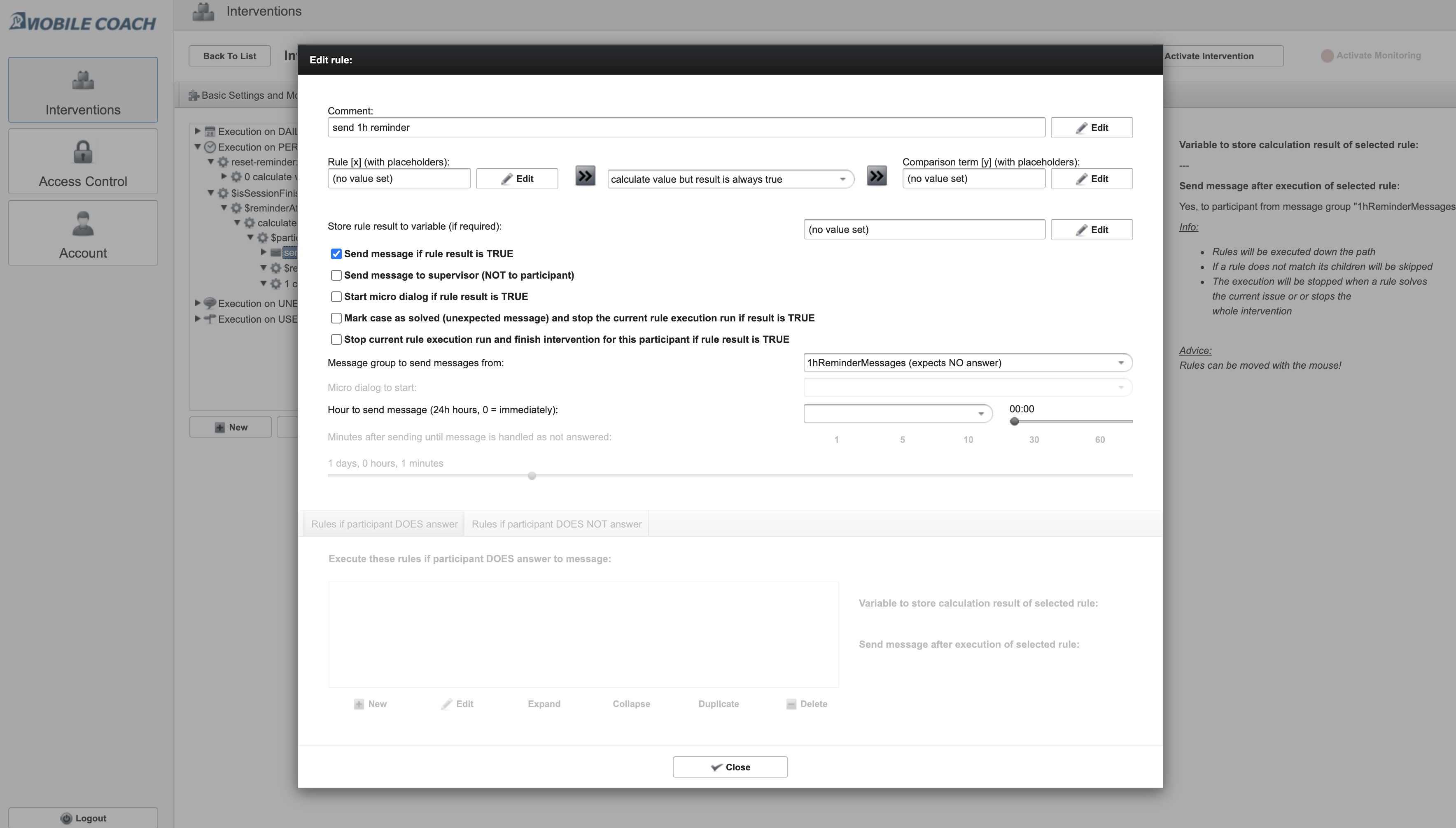 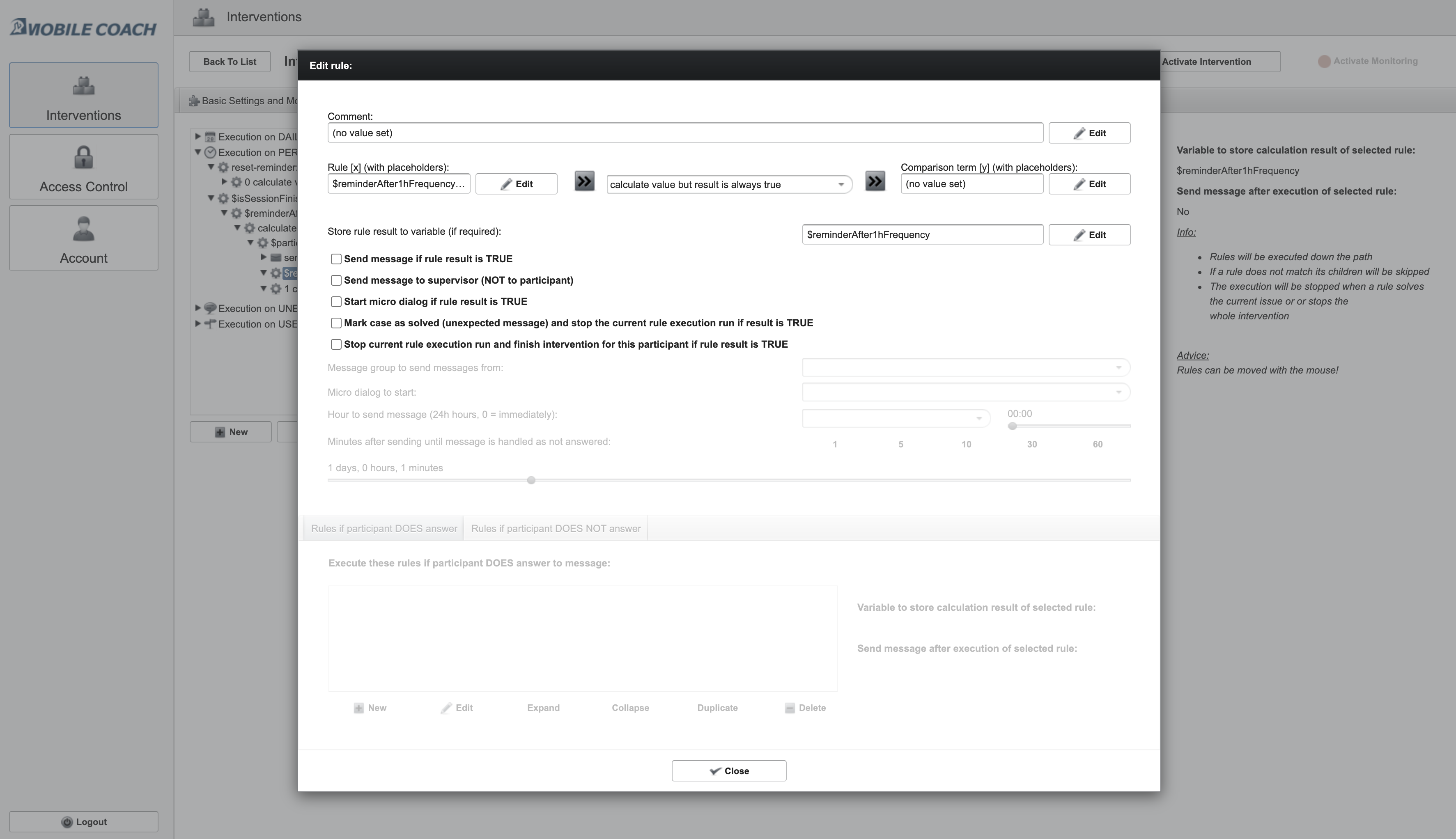 The computation here is: $reminderAfter1hFrequency + 1 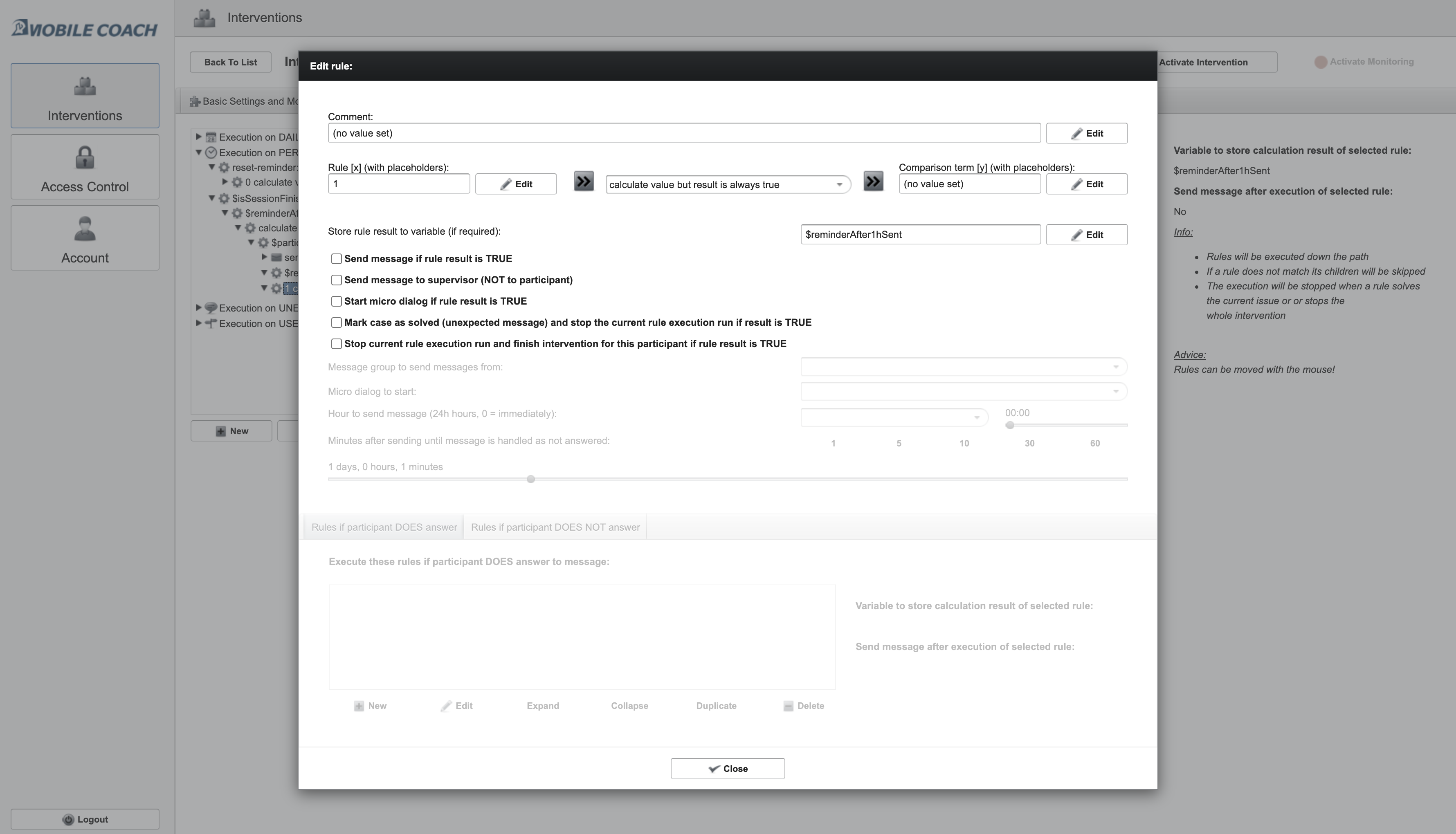